"The recognition of social inequality, class prejudice, and daily humiliation is something we poor people learn from moment we are born"

Lula, our dear and beloved president,

There is so much I would like to say, so much disgust, so much desire to comfort you, so much gratitude that it doesn’t fit in a letter.

Anyway, I am going to begin by telling my story, our story, which only began to change for the better, and drastically so, because Brazil had you as president. If it hadn’t been for this, we could still be condemned to a social order that excluded us, which has perpetuated and reproduced itself since the most distant past.

As a teenager in the 1980s, I was already old enough to understand, at least superficially, the Diretas Já demonstrations and the commotion surrounding the death of Tancredo. I suffered the aftermath of the military dictatorship, just as we have continued to suffer to the present; it haunts us daily.

During the Sarney government, I took turns with my mother going on the ever-more-expensive trips to our neighborhood grocery store to buy cans of oil, rice, and beans in tiny amounts. What times those were…. As a girl, I got sick of peeling potatoes and saving the skins to fry. Meat, fruit, and vegetables were all hard to find on the tables of the poor. So different from how things were recently, during your administration and that of President Dilma, when eating was no longer a daily struggle and there weren’t so many restrictions on the menu. Today, unfortunately, it is no longer possible to say the same thing. The cost of living is killing us, and even sadder, we don’t expect anything will change in the short term. But we are remaining strong, with faith in life, faith in man, faith in what is to come…

Around this time, my mother separated from my father, who drank a lot, and began to work as a maid so that she could feed, dress, and educate her children on her own. Since the salary of a school janitor was not enough to cover her expenses, she found a second job in the local headquarters of the PT in Londrina. When she didn’t have anyone to leave us kids with, she would take us to work with her. I think that this was when I began to become conscious of the world of politics, because the recognition of social inequality, class prejudice, and daily humiliation is something we poor people learn from moment we are born, in every scornful look, in every no we hear.

When it came time to take the university entrance exam, I really wanted to study law. But all the effort of a public school student, who started working at 13 and after that had to take night classes, wasn’t enough to compete for a spot with students who went to private school, who were from two-parent homes, who took language, music, and dance classes, who had traveled and bought things, with time left to spare. Sometimes I think that if more people like me had had, back then, the opportunity to attend public universities and study law through policies like the ones that you and Dilma implemented for black and public school students, maybe judges today would be different. Maybe the judiciary would be less stuffy, more just, and more responsible, rather than a tool for maintaining privileges and the status quo, acting with an iron hand against some, even when there is no proof, and closing its eyes to others, when there is plenty of proof. Of course, I don’t dismiss the possibility that if things had turned out that way, I might have turned into just another lawyer, judge, or prosecutor integrated into that system, helping to maintain and continuing to perpetuate it.

Back then an very powerful idea reigned supreme among us, one that, during your administration and Dilma’s presidency began to lose its power, until it became what it is today, a sort of urban legend: the idea of meritocracy. We believed – they made us believe – that the most varied life experiences, from the poorest to the richest, could be evened out, if only we had equal access to public sectors. I honestly have no ideas how we remained trapped in this trap for so long...

I wound up getting into a less competitive degree program, but which I came to love all the same, where I found fulfillment as a professor and educator and by developing a critical approach to the reality that surrounds us. I dedicated myself completely to the study of history, even as I worked 8 hours a day, so that I could break the chains of class that I and so many other Brazilians were condemned to wear, simply because we were born poor. I earned a Master’s, a Ph.D., a postdoc. I studied in the country’s best public universities, I had scholarships, I lived in France. All of this thanks to the structural changes, the changes in mentality, that your government and Dilma’s promoted.

Our first jobs in public universities were in a federal university founded under your government, in one of the poorest regions of the country, the Jequitinhonha Valley. We were hired during one of the most difficult times in our lives. We had finished graduate school, but we were unable to find jobs in private universities, which rarely hire people with doctorates. And we had our first child right around that time.

Around this time, it wasn’t just our lives that changed; we witnessed the same change happen in the lives of many of the students of that region. I feel so gratified to see them forging new paths out there in the world beyond. We have former students all over, attending graduate school, working in museums, labs, branches of foreign businesses.

In our comings and goings between Diamantina, where our campus is located, and Paraná, where we visited our families for vacations, we were also able to see the PAC works. Only someone who lived through these deep changes in Brazil understands the impact of your government and that of Dilma in the day-to-day lives of these people in our country who come from the most varied walks of life.

Today I teach Brazilian history in a university in Paraná, and I continue seeing the impact of the changes implemented during your government and that of Dilma, both inside the university and out. No matter how many conflicts there are – and it’s good that they exist, because it proves that we are no longer sweeping our most sensible problems (like racial inequality and racism) under the rug – today it is understood that we need to discuss our conflicts and overcome them. Fortunately, the university has been a stage upon which these changes have taken place.

In protest against the drawn-out persecution that you have been going through, without a truce, on May 10, 2017, the day you were called to testify in Curitiba, I registered as a member of the PT. If what lies behind all this is an effort to annihilate the PT in Brazil, we will be reborn stronger and more united against the threat to democracy and the rule of law, against this fascist offensive.

I know that some people can’t or won’t see all the changes that have taken place in Brazil since the 2000s. Maybe they have never lacked anything in life and need to guarantee that they’ll keep the privileges they have enjoyed throughout history. Or they have been sufficiently influenced by the hegemonic media and its agents, particularly the Globo Network. Or they were born in the 1990s and lack the perspective of the decades that came before, when state violence and scarcity reigned. As Mujica has said, every generation is incapable of learning from the experiences of those that came before, unfortunately. This is why they have a hard time understanding the impact of your government and the current situation, because their social experience is connected with a period of development. This is why they relativize authoritarian/totalitarian regimes and even policies of murder/torture, often stimulated by irresponsible people of a fascist nature, who portray themselves as champions of morality, intoning slogans, when in fact they are nothing more than the bullies of the Republic, brutes who are… shitty.

Regardless, and setting all this aside, I want you to know that you have a multitude of people around you, who are fighting, each in their own way, for your freedom, and we will not rest until we see you take up your struggle again, the one you were always destined for. Surely this will happen soon, since your imprisonment is unconstitutional. We want to believe that we live in a democracy, fragile, but still a democracy, and that our struggle is not and never will be in vain, and that we will be able to consolidate it in the face of yet another coup (which I hope will be the last) being carried out in this country.

I hope that our children and the people we love will not one day suffer the consequences of our passivity in the face of the successive and systematic losses of social, civil, and political rights. I hope that that they will not be ashamed of who we were or of how we acted or did not act in the face of everything that is happening. After all, considering the way things are now, not doing anything is also doing something.

I hope this letter arrives at its destination, in the hands of the greatest president this country has ever had and that it’s not intercepted along the way, confirming what lots of people have been saying for a while – that a new type of dictatorship is being constructed in Brazil, with more respectable institutions (or at least they are supposed to be) at its service, with old players allying themselves to new ones, both domestic and international.

Somewhere, Mrs. Marisa and your mother are protecting you, watching over the most noble son of this nation. Just as we are, in the streets, the homes, the state capitals, the small and large cities, the furthest reaches of this country. You are present everywhere as an idea, making us think, like a seed growing vigorously in our minds and hearts.

I thank you for myself, my family, my friends, my colleagues, and my students for everything that you did and will still do for the Brazilian people, even if some don’t deserve or understand your greatness, what a great president you were, and, we believe, will be again.

Finally, what remains for me to ask now is that you stay strong in there, while we hold the fort down out here.

Although we miss you deeply and are sad, with faith and hope we are by your side, president. Feel our care and love, our affection and tenderness.

A big hug from this family that respects you so much and fights for a better country, where equality will not be only a word empty of meaning, and where dreams will never grow old.

P.S.: You don’t know it, but my second child is your godson. May St. Francis protect you and be by your side, because, as we know, Pope is too. 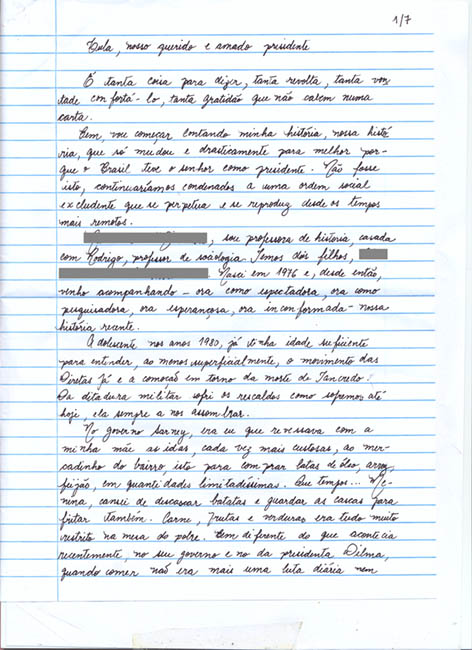 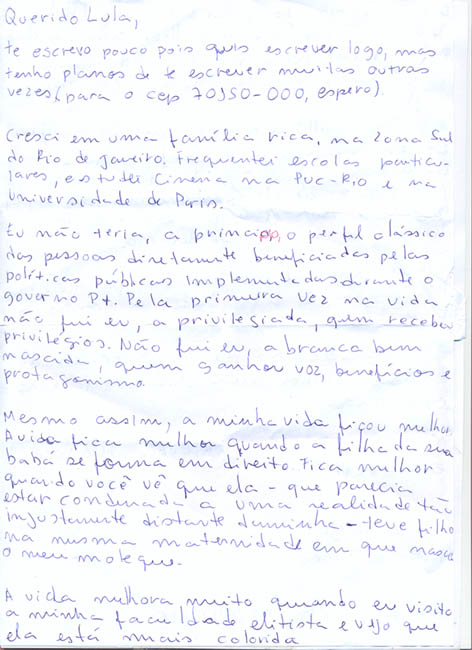 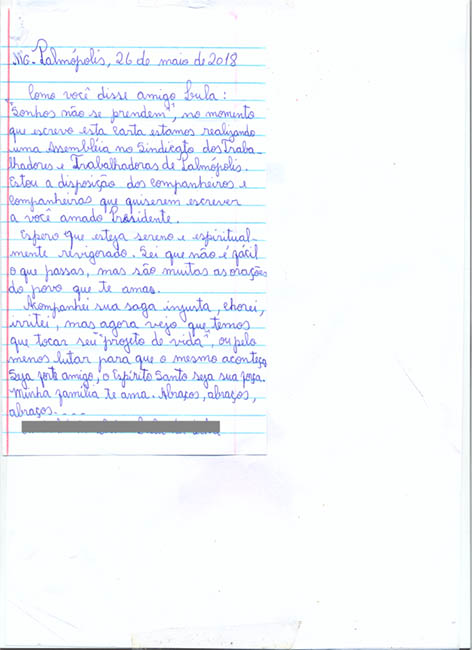 "You took away many people’s hunger." 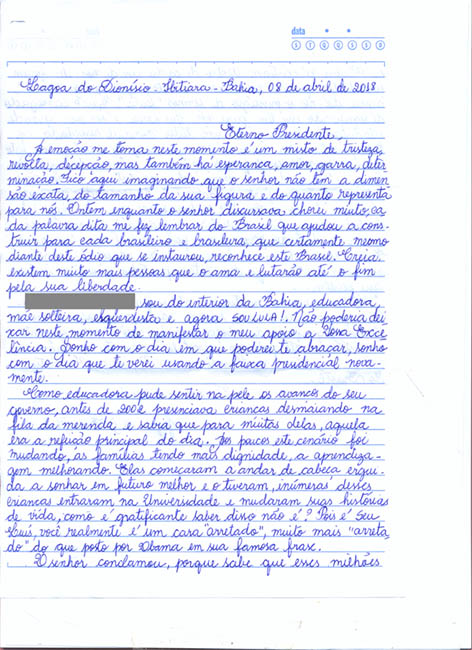 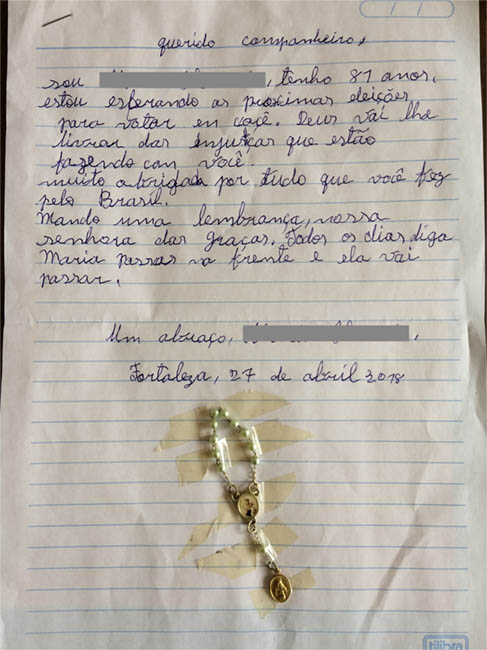 "Everyday say, Mary, open the way for me, and she will."